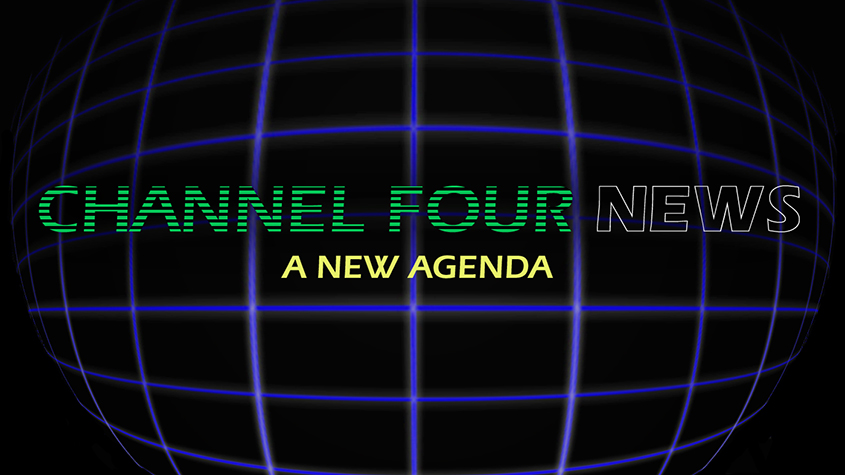 Channel 4 News is a new kind of television news. Instead of just following and reporting events, its brief is to anticipate and analyse them, with a special emphasis on the serious side of current affairs. But changing the values of the news agenda has not been easy. ‘News does not tell you how the seed is germinating in the ground, it only tells you when the first sprout breaks through the soil.’ Walter Lippman said that in 1922, and the criticism can still be levelled at television news. It tells you who and what and where and when. It rarely tells you why.

The impetus for this new sort of news developed from a dissatisfaction, inside and outside the television industry, about the way television news works. Back in 1975, Peter Jay of ‘Weekend World’ and John Birt of London Weekend Television were complaining that the nature of the medium mitigates against any serious treatment of news. Television, naturally, thrives on the visual rather than the verbal. Pictures of things happening make better television than ‘talking heads’. Jay and Birt argued that television could analyse the news if it were given more time. They suggested a daily hour-long programme, which could give the main news headlines and then move on to look at the key stories of the day in more depth. Other critics of television news, mostly outside the television business, argue that the problem is more deep-seated. They want not more news, but different news. Chief among these critics is the Glasgow Media Group, a group of academics based at Glasgow University. It argues that there is no such thing as ‘raw news’. News is always selected and processed before it reaches the viewer. Nor, the group says, are reporters impartial. In their choice of stories to cover, they are guided by something called ‘news values’. News values define what is and what is not news. They create news. So reporters cannot simply report. They must also create.

So what is news? Journalists have no difficulty fielding this question. News, they say, is what most people think is news. News is a consensus of what is newsworthy. Critics of this view say that consensual news values provide a tunnel vision of events. We need a wider view and different perspectives. This debate set the agenda for Channel 4 when it drew up its plans for ‘actuality’ programming. The brief for ‘Channel 4 News’ – whoever provided it – had three main planks:

‘Channel 4 News’ would concentrate on the more serious areas of news, with specialist reporting of science, industry, business, politics and the arts. It would give them the priority over human-interest stories, royalty, sport, and so on. Liz Forgan, the editor at Channel 4 with the job of drawing up the brief, says: ‘The aim was deliberately to change the values of the news agenda.’ In this way, the programme could anticipate rather than react to events abroad and could report world affairs in ways not always dictated by disasters or summit meetings. More ambitiously, Channel 4 News would encourage a foreign perspective by using the work of broadcasting organisations of other countries to see ourselves and the world at large through ‘foreign eyes.’

But perhaps the biggest commitment in the brief was to the length of the new news programme. ‘Channel 4 News’ runs for 50 minutes, about twice as long as any other television news programme. This is an important discipline. As Liz Forgan says, ‘It demands that you change the bowling length of everything. By going for an hour, we were forcing ourselves to do things a different way.’ The problem then lay in finding an organisation, which could do things in a different way. The Conservative government, which had chivvied Channel 4 into being, always imagined that Independent Television News would get the job. ITN had a good track record of radicalism. When it arrived in 1955, it changed the face to television news. It replaced talking heads with live action. More important, it gave status to TV news. Before, television news had been merely an illustrated version of the radio news. Now it was people’s main source of news. If ITN could do it once, its supporters argued, it could do it again.

A recreation of the ITN corporate logo © ITN

The question was, could ITN learn the different ‘grammar’ (a Glasgow Media Group term) required by the new news programme? Grammar means the way stories are put together and juxtaposed. The Glasgow group looked not just at the vocabulary of news items, but also the visual organisation of the news, and was highly critical of ITN’s methods. It said that while the news had a surface appearance of neutrality and balance, it was, in fact, partial and restricted. The worry was that ITN would simply do new things in the old way. ‘We never had any doubt about that,’ says Liz Forgan. ‘The serious question about giving the contract to ITN was whether it was right to reinforce the ITN-BBC duopoly or whether it was our duty to add a wholly different news source to what was available on British television. In the end, we were in no doubt that the best hope of making our concept work lay with the expertise and resources of ITN.’

Channel 4 gave ITN the main news slot, but balanced this with various items of independent comment, the largest of which was the half hour ‘The Friday Alternative’ (Channel 4, 1982). There was also an insistence on bringing in new journalists from outside television into the ITN editorial team which would produce ‘Channel 4 News’. Many of the new team were recruited from print journalism. The start was pretty disastrous. Some of the new arrivals brought new strengths with them; others never fitted in. The task of a new style of news at an unfamiliar time of the night, with a new team and as part of a new channel, proved more difficult than anyone expected. But a few months in, a new editor and a big story made all the difference.

The miners’ strike was the making of ‘Channel 4 News’. It showed what they could do best – a major political and industrial story, where the issues were complex, and time for argument and analysis paid off night after night. There was the idea of getting McGregor and Scargill to make their own programmes – nobody had thought of it before. And there was the idea of sending a crew down to Shirebrook for a week to share the lives of miners and their families.

Stewart Purvis took over as editor nearly two years ago. He rejects the idea that ITN has ‘hi-jacked’ ‘Channel 4 News’, or that it has lost sign of its original aims. ‘I think we are now doing what we were always supposed to be doing. At the beginning, some people thought that a different news programme meant different stories. But if you ignore the news of the day, you force people to switch channels to find out what’s happening.’ The programme covers the day’s news, but this does not mean that is always sends its own team to cover the news. It shares resources with ITN’s other news programmes and relies on Channel One (the ITN name for ‘News at One’, the 5.45 News and ‘News at Ten’) to do much of the ‘frontline news gathering.’

For its part, Channel 4 looks at it from a rather more analytical angle. ‘On the day of the Manchester air disaster, we didn’t send a single crew to the basic news story. What we did was fly up a retired air accident investigator with a crew to the scene of the crash.’ By running ‘frontline’ news taken from the 5.45 programme, together with its own story about the possible causes of the disaster, ‘Channel 4 News’ was able to get the best of both worlds.

While always keeping an eye on the news of the day, ‘Channel 4 News’ is able to graze far further a field that other television news programmes. It now regularly initiates stories, which are then picked up by the Channel One programmes. This happens to those areas – the ‘news agenda’ – which Channel 4 originally asked its news service to concentrate on. Science is one of them. Lawrence McGinty, science correspondent on ‘Channel 4 News’, unearths stories about the decline in the number of mentions British research is getting in the scientific journals. ‘It’s not immediately of general interest, but it’s important,’ Stewart Purvis says. ‘It shows that Britain is slipping in the league.’

The arts is another new pasture. ‘Channel 4 News’ has the only arts correspondent on television news. Yet coverage of the arts presents special problems. The arts are not news. Most arts stories, which are news, are about money rather than art. So how, short of reviewing, do you cover art?

Foreign news coverage has revealed rather different problems. The intention of a ‘foreign perspective’ was to introduce a little pluralism. ‘To break up the certainties of British journalism,’ as Liz Forgan puts it. But pluralism is sometimes expensive and time-consuming. The technical problems of linking up with foreign reporters have been ‘formidable,’ according to Channel 4. There is another problem. Many of the foreign news stations that ‘Channel 4 News’ would like to link up with are showing the same pictures that are available through agencies in Britain. So ‘Channel 4 News’ sometimes cannot get away from ‘the certainties of British journalism.’

Still, there have been successes. ‘Channel 4 News’ has carried American reports on the miners’ strike, Russian assessments of the D-Day anniversary, and a Japanese view of the British Nissan plant. Ideas are still evolving, particularly about what is and is not a legitimate area of news for ‘Channel 4 News’. Sport is marginal. Usually it is covered in the news summary. Occasionally, it deserves longer treatment. When Barry McGuigan won the world featherweight boxing championship, Channel 4 saw the political side of the story: ‘We had an interview with Jim Prior before the championship, saying that McGuigan had done more for peace in Ireland than he had ever done in his years as Northern Ireland Secretary,’ Stewart Purvis says.

‘Channel 4 News’ is also now exploring the idea of a different kind of news – what might be called trends stories. Stewart Purvis explains, ‘News is normally a matter of looking at the world at seven o’clock and seeing how it compares with the world at seven o’clock the night before. It ignores the underlying trends. The conventional definition of news does not include trends. There should be reporting and analysis of trends in society, without hard news pegs to hang them on. There are areas, like retailing, which the news ought to be looking at. We are now doing this. But there’s never going to be a hard news story about convenience stores until one burns down.’

‘Channel 4 News’ thinks it has reached a point where it can do stories without news pegs. It is currently doing a piece on life in an Edinburgh council estate. But this is now, Purvis says, a new sort of news. It is news, which has always been there, waiting to be picked up.

Is this what Parliament meant when it charged Channel 4 to provide a “distinctive service”? Is this television news with a difference? Stewart Purvis believes variety rather than difference describes ‘Channel 4 News’s’ contribution. “I don’t claim that this is the best way of doing things. It’s one way of doing things. That’s the real change. At one time you had just one news bulletin. Now you’ve got all this variety. Now we can all live together happily every after.”

Variety may not be the pluralism that people had hoped for. That will have to wait until television itself becomes less centralised and more diverse – possibly as a result of direct broadcasting from satellite. ‘Channel 4 News’ may, to some, look like a lost opportunity. To others, however, it represents a widening of the choice people are given.